I don’t know about everyone else, but I seem to start twice as many projects as I finish.  What is my motivation to finish these UFO’s?  The obvious would be a restraining order from all quilt shops.  But, that’s not reasonable. Therefore, I will restrict myself to “no more” fabric until at least 4 of my UFO’s are done.  No…I haven’t been drinking!  It’s been almost 2 weeks now since I’ve bought new fabric, but I have to admit, the urge is still there… 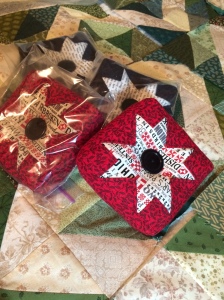 I decided to go with an easy project before diving into the abyss.  I was making a few pincushions and ran out of crushed walnut shells so I just put the project away.  Made sense to me!  Well, the pincushions are now done.  The problem with that is it has been so long that I can no longer remember whom I was making the pincushions.  Once again, NOT drunk…maybe a little dementia. 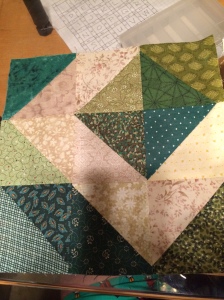 Project #2
I found a shoe box in the bottom of the tote that was bursting with green and neutral print fabrics.  Three completed blocks, my hand written directions, and sketches of the block be made.  The blocks are made of half square triangles(HST) and was supposed to be another quick project…Wrong!  I made HST’s for a couple of days before I realized why I put the project away. Now, I’ve started making these blocks again, and I SWEAR, I’m going to finish this quilt top! 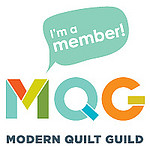 Quality Quilts From A Quilty Guy

My adventures in Quilting and Gardening

A Journey with Fibre

Exploring the possibilities of fabric and fibre

me and theo quilts